There is no pure race..we are all inter-related ! 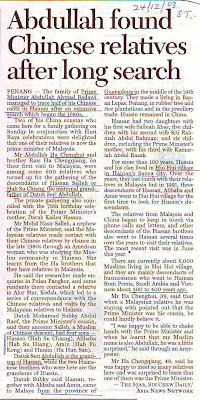 This news report which appeared in the Straits Times on 24 December 2003 tells a touching story of how the family members of then Malaysian Prime Minister, Abdullah Ahmad Badawi, discovered they had living Chinese relatives in Hainan Island, China. They stumbled about it by chance when an American lady researcher was in Hainan Island studying the Chinese Muslim community there in the late 1980's.
Salleh, the Chinese Muslim in Hainan had 4 sons named....Hassan ( Hah Su Chiang), Alibaba( Hah Su Hiang), Amin (Ha Fu Kong) and Hussin ( Ha Hun San). The first 3 named brothers left Guangdong in the middle of the 19th Century and came to Malaya, settling in Bayan Lepas, Penang. Only Hussin remained in China.
Abdullah Badawi is the biological grandson of the first named Hassan (Hah Su Chiang).
In December 2003, more than 600 descendents of Hassan Salleh came together for a big private celebration and Hari Raya gathering. It included 2 of the grandsons of Hussin who came over for the first time.
Click on the report to enlarge and read.
Does any of this news surprise anyone here reading it?
It does not surprise me at all...as the title of my post tells you.
WHY?
Surely most will be able to figure it out by sheer logic !
You can't go wrong if you start with Adam and Eve...the first 2 humans created.
Posted by Unk Dicko at 2:47 AM 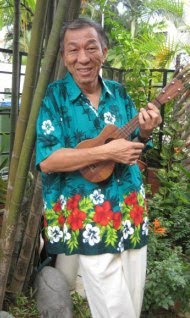